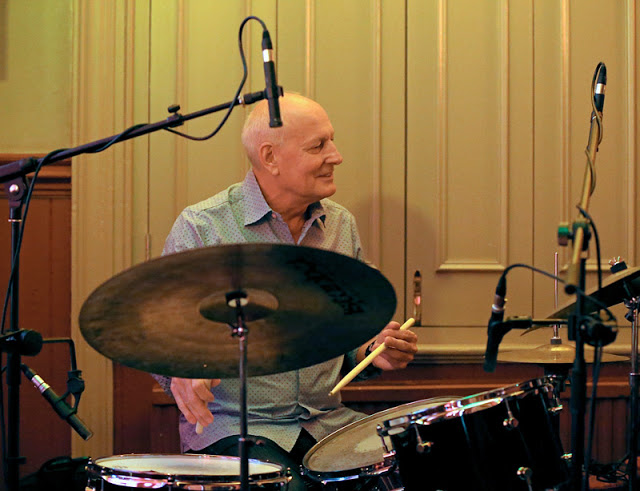 Clive Fenner, who made a massive contribution to London’s jazz scene, passed away at the end of April. In this tribute his close friend Simon Purcell remembers a remarkable man:

How do you do justice to a friend’s life? I knew Clive Fenner initially as a musician and educator. I also played volleyball with him but never football (at which he excelled). Neither did I accompany him fishing – he was a highly accomplished angler and pioneer of some methods of carp fishing. This obituary isn’t a comprehensive description or litany of regrets. Instead it is the inevitably incomplete tribute to a great friend with whom I shared a lot of life and a heartfelt thank you for introducing himself to my life and contributing to my experience and understanding of the world.

Many musicians and jazz lovers know Clive through the East Side Jazz Club in East London, while hundreds more students were transformed through their experiences of Jazz, Cuban music and educational companionship on his summer schools in Cuba and the South of France.

I first met Clive Fenner in May 1993, when he attended community jazz workshops in Forest Gate, East London. Although he had worked on the fringes of the pop world in the 1970s and ’80s, drumming wasn’t a realistic professional proposition at the time but after more than 10 years working as an educational philosopher, training teachers, Clive was at a crossroads, intent on replacing the sanctity and respectability of academe with a drum-kit, and the crimes and misdemeanours of the jazz lifestyle. We soon hit it off discussing jazz and educational philosophy, each of us eager to delve more into each other’s specialism. At this time, he began highly demanding lessons with the great American drummer Clifford Jarvis and later with the internationally acclaimed drum teacher Bob Armstrong. Not many people are aware that although Clifford was an extremely challenging person at the time, they formed a close friendship, Clive supporting him through his final illness (thank you to Nigel Tame for this information).

Pivotally, shortly after that first workshop season Clive asked me how to get gigs. My advice was to “find a pub that will allow you to play with some good players” and that is exactly what happened, Clive immediately creating the East Side Jazz Club in October 1993. The rest as they say is history. The switch had been pressed and off he went, hosting and playing at 30 gigs a year in East London.

What Jazz Umbrella and the East London Jazz Project had attempted with groups of musicians, Clive at first managed singlehandedly, in the process bringing many of the UK’s major artists to the venue. There was a deep sense of community and fairness to Clive’s work. As a result, gigs were affordable to the community, musicians were paid a decent fee and he constantly reached out to younger musicians to perform at the club. While current tributes from musicians are characterised by gratitude for the gigs and respect for his resilience, the local audience point to Clive’s invitational personality and absence of airs and graces. He was morally committed to jazz in the community and it is perhaps his local community that understood him and have valued him even more. High art in East London is one thing and sometimes playing at “Clive’s” was a bit like appearing in a Mike Leigh film or Rowan and Martin’s Laugh-In, complete with plastic foliage (if you’ve been there you’ll know) but that was all part of the attraction and perhaps its longevity.

The jazz community is largely unaware of Clive’s expertise in Teacher Education and that for many years he contributed to and led courses at various institutions including the Institute of Education, Havering College and until several years ago at Roehampton College.

It was always a treat to hear Clive discuss jazz in relation to Plato, John Dewey and the great Scottish educationalist Laurence Stenhouse (with whom Clive almost studied for a Ph.D) and although our banter was that he preferred to talk about jazz, on the rare occasions when he could be nudged into full disclosure, his discourse about curriculum was inspiring and expressed with alacrity, wit and detail. To his credit he was also extremely sensitive about professional vocabularies and didn’t want to create misunderstanding or elicit the “educrap” complaint from the more cynical jazzers. I think he would smile now, remembering how he would brand me a Platonist if I expressed a preference for Charlie Parker over John Bonham. Sometimes that would be as far as we would get philosophically!

However, it wasn’t all banter and I often sought Clive’s educational counsel. Back in 2002 he was an expert “reader” for my own research (into student-centered curriculum in jazz) prior to publication, and his guidance and informal mentoring has had a profound influence on my own work at a curricular level. Similarly, conversations spanning more than two decades about education as product and process, and the philosophical dilemmas about education as induction or Plato and absolutism were always something I cherished and which informed my work. Our discourse influenced the ways in which I have developed the curriculum in several institutions, and has in turn been shared within the UK conservatoire sector, and impacted upon thinking within the Association of European Conservatoires and beyond. Ways in which jazz students are assessed was indirectly influenced by discussions with Clive, certainty during the formative period of jazz in Higher Education in England. Of course, I told Clive of these things, recently phoning him from a conference in Norway, enthusing that “finally” Europe was on board about a shared educational value, but as usual we were quickly back to discussing drums, carp or food!

In many ways, Clive embodied the aspirations of many of his students. He worked at his music with immense determination and application, developing his technique through extensive practice and lessons over many years. He often recounted that as much as he loved the lifestyle and the music, the journey was never easy, indeed Clifford and Bob had been extremely hard task-masters, making serious demands of Clive’s time to meet their practice assignments. However he took pride in the process and it is my impression that with the release of two CDs, (Get It! 2013 and Get Up! 2017) and particularly in the last two to three years since his diagnosis, Clive had finally found some ease (and less angst) in his playing, finally allowing himself to play for fun. I think he really enjoyed the last couple of years playing.

Clive’s other community were his courses in Cuba and in the South of France.

The first Mediterranean Jazz Summer School took place in a very rural part of France, in 1996, Clive supported by his wife Hazel and a tutor team that included Steve Berry, Martin Hathaway and myself. Since then many musicians have worked with Clive (see tutor list) and the course has flourished and expanded steadily ever since. Clive and Sue Stothard (his right-hand woman) have worked tirelessly to ensure that students experience learning in a supportive and transformative environment. It would be inappropriate to make comparisons with other summer schools as they are all magnificent but Clive’s courses were very magnificent too. While he rarely taught on his courses, he was a great “boss” with a deep vision of community learning, and who understood the richness and diversity of students’ needs and the paramount importance of placing learning in the context of deep community and fun. Here he was facilitator, generously enabling us to experience some deeply transformative moments. That was his gift. The Cuba Course began in 2003 and has operated with similar success with similar emphases upon learning, community and fun.

You will hopefully gather that Clive was a doer, he made things happen. There is far too much to mention here but there were some amusing tales such as: being blindfolded in a basement in Bourges and subsequently inducted in to Le Bonnet Rouge (an ancient French revolutionary sect – I think?); the day he met Miss Universe; meeting Herbie Hancock while out for a walk in Cuba; being wined and dined by the Governor of a Caribbean Island who was under the impression that he was an international trader. And more…

The summer schools were the most intense times with Clive, where we shared many highs and a few lows but the saddest loss for me is the loss of a friend whom I saw or spoke to nearly every day and whose values, perspectives and sense of fun have blended so much with my own. Clive Fenner was a musician, an educator and philosopher, great angler, decent footballer, cook and some would say “reluctant hedonist”, he loved the arts and in many ways was a contemporary Renaissance Man whom I respected and loved a lot.

I know you liked making a racket on those drums, Clive, but you had a great, inspirational (and funny) mind too. We miss you.